Not only was the German .ruhr the first new top-level domain to become generally available, on 27 March 2014, as part of ICANN’s “new gTLD Program”, it again took the lead with the announcement on 5 April 2016 by the telephone book publisher Sutter Telefonbuchverlag of it shifting its entire corporate communication to sutter.ruhr. 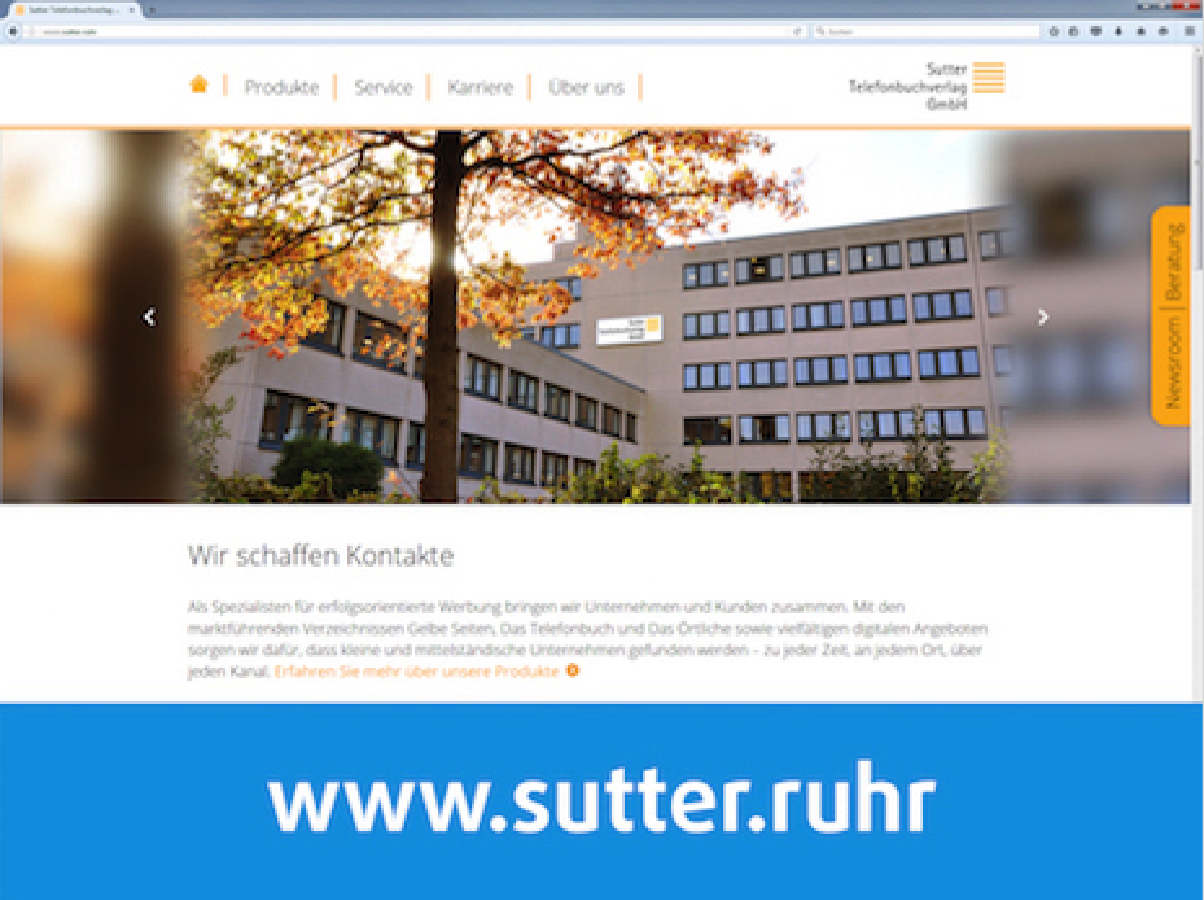 Sutter Telefonbuchverlag GmbH is a local market leader in contact brokerage for small and medium-sized companies – not only in the Ruhr Area, but also in Brandenburg, large areas of Baden-Württemberg, and also in Lipperland, where Sutter is represented through the respective branch offices.

The company, which is predominantly active the business of directory media under the multi-access brands “Gelbe Seiten”, “Das Telefonbuch” and “Das Örtliche”, recently expanded is range of offers in the area of digital and performance-based advertising forms.

The change-over to the new regional Domain ending .ruhr only affects the headquarters of the company, based in Essen, in the heart of the Ruhr Area.

How did you become aware of the new top-level domain .ruhr and the possibilities it offers?

We didn’t need any external impulse – the whole idea of .ruhr came to life in our house. We ourselves founded the company regiodot GmbH & Co. KG, with which we then applied successfully to ICANN in 2012 to operate the domain ending .ruhr. So it’s our own sister company which today acts as the official registry for Germany’s first regional domain ending.

As a result, it was only natural and logical for us to make a swift and thorough switch to the new domain ending. Seeing as we are more closely bound to the topic “new gTLDs” than other companies, we have an admittedly special position. And yet, we wish to act as a positive role model, and give other regional companies a taste for .ruhr.

The switch to the new domain is an important step for corporate communications. How much work did it involve?

Certainly, the work required for a complete change-over should not be underestimated. In our own case, the technical switch (e.g. the central adjustment of the email traffic as a whole) was the fastest task to be carried out – the many small changes have been taking up more time: From commercial documentation to invoices, and on to business cards – everything needed to be re-printed. And a lot of water will have flowed down the Ruhr before the last of our staff have dealt with, for example, all of the logins that were associated with their old email address. 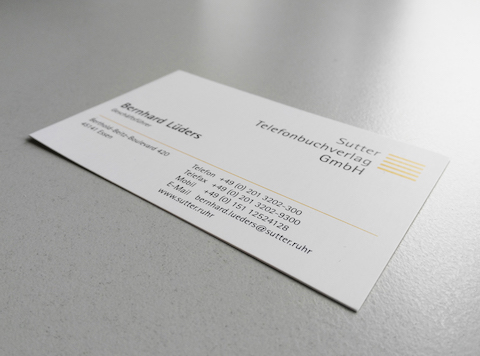 And yet, the effort has been worth it for you. For example, the new address is considerably shorter – what other advantages are you benefitting from with your new domain sutter.ruhr?

Before the change-over in April 2016, our domain was much less compact. That wasn’t so much the fault of the top-level, but actually of the second-level domain: “sutter-telefonbuchverlag.de” was cumbersome, above all for email addresses – particularly if your name’s not John Smith, but Johnathan Smythe von Schmidt.

Even though – in comparison to .de – we’ve added two more letters with the new ending .ruhr, the saving BEFORE the last dot is considerable. On another note, the alternative “sutter.de” was not available for us; .ruhr opened new possibilities – for us, and for all other companies in the Ruhr Area.

Alongside the increased conciseness, what was particularly decisive for us was the fact that we clearly acknowledge our link to the Ruhr Area through the ending .ruhr: We have been deeply rooted in this region for nearly 90 years, through our main location – something we can now express through our domain.

Would you also recommend other companies to take this step?

Without question. In the cost-benefit analysis, the rather large, but once-off undertaking is outweighed by having a coherent overall presence for corporate communications. Regardless of whether you decide for a domain with a traditional ending like .de or one of the new endings like .ruhr as your main domain – this decision should be binding and should be consistently implemented throughout the company.

Your new web address has been live since April. What feedback have you had so far? How have your customers reacted?

In our own ranks, the feedback has been thoroughly positive; in conversation with business partners, our domain ending has met with astonishment, but also open ears: Not everyone understands immediately that .ruhr replaces the familiar .de – the whole topic of the “new gTLDs” is in principle still new.

Once the penny has dropped, customers and service providers are pleasantly surprised and quickly see the benefits of the Ruhr Area ending. Of course, we are continually gaining extra popularity points, especially in dialog with people directly from the region – this opportunity to get unbidden into conversation with companies is something that we certainly don’t waste.

IPv6 should soon become the predominant transport protocol, demands the Competence Group Networks in the eco Association. An eco survey is trying to determine which obstacles are currently preventing companies from switching completely from IPv4 to IPv6. Leader of the eco Networks Competence Group Falk von Bornstaedt explains the background in a short interview.

Dallas 560.17 Gbps, Frankfurt 12.43 Tbps, Hamburg 280.2 Gbps, Marseille 170.16 Gbps... and that's just this week. It might be the core season for holidays in northern hemisphere, but the data throughput at DE-CIX Internet Exchanges keeps on growing.