For 25 years, the Complaints Office of eco – Association of the Internet Industry has been successfully combatting illegal content on the Internet. The 2020 report now available shows that the independent hotline is making a significant contribution to the take-down and criminal investigation of illegal content: With a total of 5,523 cases, the number of justified complaints displaying a clear violation of the law was higher in 2020 than ever before, and had increased by almost 19 percentage points compared to the previous year. 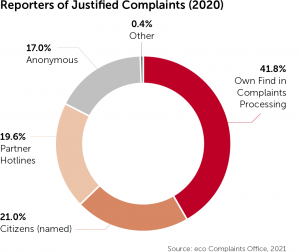 “People have become highly attuned to the fact that they can report illegal Internet content with just a few clicks and thus contribute to its permanent take-down and criminal investigation,” says Alexandra Koch-Skiba, Head of the eco Complaints Office. “Each and every individual contributes to the fight against child pornography, incitement of the masses, and violence on the Internet.”

Prof. Christian Kastrop, State Secretary at the German Federal Ministry of Justice and Consumer Protection, adds: “Hate speech, disinformation, and conspiracy theories are currently spreading at high speed on the Internet. Our society must do everything in its power to counter this development. Hate speakers and extremists must not be left to their own devices, and statements that are liable to prosecution must be investigated at all costs.”

Kastrop goes on to emphasize the importance of prosecuting child pornography quickly and effectively under criminal law: “Sexualized violence traumatizes children for their entire lives. Combatting it is therefore one of the most important socio-political challenges of our time and a central task of the state.”

Reported violations largely in the area of child pornography

Child pornography content accounted for almost two-thirds of justified complaints in 2020. Furthermore, reports on freely accessible adult pornography (1,149 cases) increased significantly compared to the previous year. Of more than 750 complaints received regarding potentially anti-constitutional content, just under ten percent of the content was classified as illegal. This includes incitement of the masses as well as the dissemination of propaganda material and the use of symbols of unconstitutional organisations. 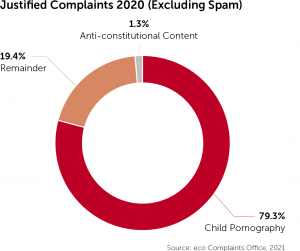 “The attacks in Halle and Hanau, the murder of Walter Lübcke, and the storming of the U.S. Capitol orchestrated via the Internet: such incidents have made many people more vigilant against extremist ideas and populist content,” Koch-Skiba comments. “Nonetheless, not everything that comes across as extremist is subject to criminal prosecution, meaning that such content requires intensive scrutiny. Especially when there is uncertainty, it is important to report such content.”

As such, the 25th anniversary of the eco Complaints Office is celebrated under the motto of “Together for the Good of the Internet.” Aside from the responsibility taken on by users themselves as well as policy-makers and a broad alliance of national and international network partners, this responsibility is also embraced by Internet providers, companies, and law enforcement agencies.

“Internet providers and companies are already taking on a lot of responsibility in tracking illegal Internet content as quickly as possible and in having it permanently removed,” says Koch-Skiba. “Voluntary self-regulation works – also internationally. Further mechanisms such as mandatory upload filters would only counteract this approach.” 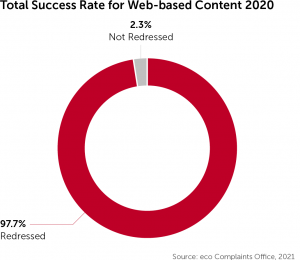 The Complaints Office’s success bears this out: 97.7 percent of the reported content was successfully removed in 2020 or was otherwise legalized, for example with an age restriction for children and young people. Less than one fifth of the reported URLs were hosted in Germany. Compared to the previous year, the eco Complaints Office also recorded a slight increase in its success rate.

The German federal government has set itself the correct and important objectives for gigabit coverage. It intends to bring Germany into the forefront group of industrial nations in the digitalisation of industry and society.

Commenting on the proposal for a new quick-freeze procedure presented on Tuesday by the Federal Minister of Justice Marco Buschmann, eco Chair of the Board Oliver Süme welcomes the approach and the related planned repeal of data retention in Germany.

An electricity shortage in the energy crisis could have a negative impact on the operation of data centres and become a risk factor for user companies. Companies fear serious consequences for their business and call on the German federal government to include data centres in emergency plans.