A summary of the highlights & insights from the 24th Annual General Meeting in Kuala Lumpur is now available.

The eco Association was on site at the ICANN75 Annual General Meeting in Malaysia from 17 to 22 September 2022. At the 24th Annual General Meeting of the Internet Corporation for Assigned Names and Numbers (ICANN), Oliver Süme (eco Chair of the Board), Thomas Rickert (eco Director Names & Numbers), Wolf-Ulrich Knoben (DE-CIX Advisor) and Lars Steffen (eco Director International) represented eco and its member companies.

The innovations and insights from the hybrid meeting were presented by the eco Association and ICANN in an ICANN75 readout. The online meeting was moderated by Lars Steffen and Thomas Rickert, alongside Christopher Mondini, who is Vice President and Stakeholder Engagement & Managing Director at Europe ICANN Org.

Speakers from different sectors of the ICANN community provided their insights, with these including Chris Disspain, Council Member of the ccNSO; Philippe Fouquart, the outgoing Chair of the GNSO Council; Matthias Hudobnik, Member at the At-Large Advisory Committee (ALAC); and Manal Ismail, Chair of the Governmental Advisory Committee (GAC). Sebastian Ducos, the incoming Chair of the GNSO Council sent greetings and an apology for not being able to attend the meeting.

In commencing the readout, Christopher Mondini provided an initial overview of the ICANN75 AGM. In total, 1,957 participants from 112 countries attended the meeting, 1,165 of whom were present on site in Kuala Lumpur, while an additional 792 attended remotely. The AGM encompassed both Board elections and changes in leadership. ICANN’s new Chair of the Board is now Tripti Sinha, currently based in University of Maryland in the United States, while the Vice-Chair is Danko Jevtoci from Serbia.

One of the core highlights reported from the AGM was the approval by the Board of the ccNSO policy on the retirement of country codes which are no longer needed or which no longer exist. A day at ICANN75 had also been dedicated to universal acceptance and work on internationalized domain names, which has been in operation now for 20 years. It was also no surprise to learn that a celebration took place regarding the work into the generation of labelling for various scripts: in acquiring 22 alphabets, this has involved thousands of voluntary hours from almost 50 countries over the past 12 years. A concluding session at the AGM was held on governmental and regulatory activities, involving a strong focus on the initiatives of the International Telecommunications Union (ITU) and the EU institutions, as well as highlighting influential markets such as China and India.

At ICANN75, Wolf-Ulrich Knoben’s term of office also drew to a close. For many years, Knoben represented eco and DE-CIX in the ISPs and Connectivity Providers Constituency (ISPCP), and he has been Chair of the ISPCP since 2019. “We would like to take this opportunity to thank Wolf-Ulrich Knoben for his many years of commitment. His tireless efforts and expertise have advanced the work of the ISPCP significantly,” says Thomas Rickert, Director Names & Numbers at the eco Association. 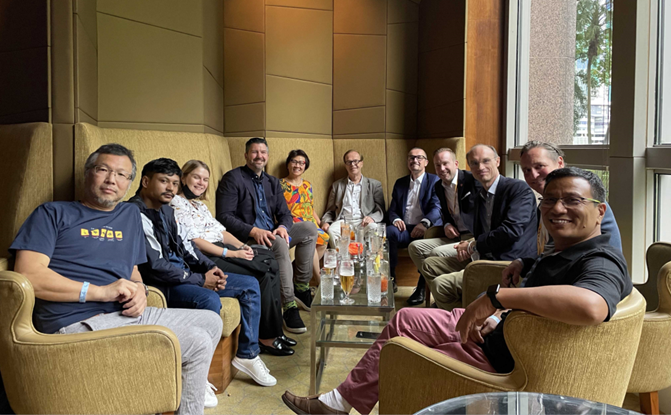 In the meantime, Philippe Fouquart has been elected as the new ISPCP Chair, while Susan Mohr has been voted in as the Vice-Chair. In wholeheartedly congratulating Fouquart and Mohr, Wolf-Ulrich Knoben shares his belief that, “with your skills and experience, you are the ideal leaders for this management role”.

Watch the video in its entirety.

To accompany the potential revitalisation of digital trade via the Trans-Atlantic Data Privacy Framework, two transatlantic dialogues were jointly hosted by the European-based eco Association and the U.S.-based i2Coalition, with these taking place on 6 October 2022 in Washington, D.C., and on 6 December in Brussels.

What is DNS Abuse – And What is Not?

The eco initiative topDNS has published an Abuse Table to provide guidance on which cyber threats are considered to be abuse of the Domain Name System – and which are not.

eco at the ICANN75 Annual General Meeting in Kuala Lumpur